One of the main principles that is taught in CHE (Community Health Evangelism) and modeled by Dr. Gomez is the principle of equal sacrifice. It is this principle that has kept myself (Mike Douglas), my brother Kirk Douglas and the teams we lead to Guatemala going back again and again to help the people in the indigenous villages.

It was the fall of 2011 that the Gomez’ and several CHE trainers took us to a village where we spoke to them about their dream to get water to the top of a ridge outside of the village of Chancenxil.  Being in the highlands outside of Quetzaltenango this was no small-task. The ridges are tall, the trails treacherous and any running water was in the bottoms of gorges. But the local’s heart felt dream of water for their village convinced us to come and at least try to drill a well.

It wasn’t until the following spring that we went with a small team to try to drill for water, as a beginning of helping the village reach their dream. We were greeted by many of the locals that eventually did everything but carry the drilling rig to the only spot they thought we could hit water. After a few days of drilling in the rain it was time to line the well casing with clean gravel that had been meticulously separated by size and cleaned by the village women. As the kids played in the fresh water of the well it was obvious that the CHE principle of equal sacrifice was at work.

Unfortunately, the well did not produce enough water to meet the needs of the entire village but there was enough water for the local church and they requested that our next step would be to run the pipe to a spigot at their front doors.  They wanted to be a church that not only provided pure water but the living water of Jesus Christ, both coming from the same site. Getting the water from the freshly drilled well to the church would have to wait until our next Short-Term Team’s trip.

That next spring a high school team from Littleton Bible Chapel came and put their shoulders to the plow again with the locals and started to dig a trench for about a mile so a water pipe could be ran to the church.  It was quickly obvious that there was no way that this team of young people could dig a mile long trench in the rain, up hills and on a rocky road. Soon the shovels and hoes of the local farmers joined their efforts working for days to dig this trench.  One night discouraged the young people left for the night only to come back the next morning and see dozens and dozens of people finishing the trench. Equal Sacrifice again at work. The dream of the locals was partially realized by a pump and pipe provided to them but it could have never been realized without sweat equity that was demonstrated by every person in the village.

It wasn’t until the next summer that Kirk began to hear rumors of a spring that the locals and the CHE Trainers had found and wanted to purchase. That fall he traveled to the site again and walked the 3.5 miles down, down, down to the bottom of a gorge to inspect the spring. Covered in sweat and wondering if he was going to be able climb back out of the gorge; Kirk told them that as soon as they got electricity to the site and built a concrete vault to capture the spring that we would begin to plan the project of pumping the water up 3500 feet and over 3.5 miles. The task that lay before the locals was enormous, both in man power needed and finances. It was hard to imagine farmers earning ~$15 per week could ever begin to accomplish the impossible. But their dream of water and their faith would carry them up and down the mountain carrying load after load of concrete, sand and gravel to build a vault that to this day we still are awestruck by. Mike and I were sure we were safe from having to return anytime soon just because of the enormity of this task the locals were faced with.

Another year went by and we had learned that the CHE Trainers were starting to ask Hugo Junior when we were returning. In the fall of 2016 Kirk began a fund raiser that helped purchase two key elements of this project: 2 multi-stage 15 horse power pumps and 3.5 miles of high-pressure pipe.  The next summer Kirk and I began to discuss and pray for the perfect team that would help build this pipeline and install the pumps. The Lord provided a team made up of endurance athletes, ex-marines, and an engineer. All, by Guatemalan standards, were “giants in their land”. With the team in place, along with dozens and dozens of locals, they struggled up and down the steep slopes together installing pipe and standing in knee deep water playing with high voltage electricity. But they only succeeded in part. At the end of the week, knowing that we were not going to accomplish getting water to the top of the ridge, our American team left defeated. However, as we left the village we were greeted by many locals. Amongst them was the local pastor who came up to us and said he was going to pray for our return, that we would not forget them, and that they were going to wait for our return.

Six months passed and we returned to Guatemala with a new pump and a new resolve. After 3 more days of climbing up and down the steep slopes we finally were greeted with the sound of fire crackers and mortars blowing up.  It was a celebration of our accomplishment! Finally, five years later, water was running to the top of the mountain. With tears running down everybody’s cheeks we all realized it couldn’t have been accomplished without the EQUAL SACRIFICE of many hundreds of individuals who put their shoulders to the plow.

This and Christmas reminds me that the ground at the base of the cross of Calvary is flat and that the sacrifice of Christ for our sins is an Equal Sacrifice for all of those who put their faith in Him.  When we are in Heaven we will stand side by side with our many brothers and sister from Mesoamerica knowing He has paid the price.

We can’t do this work without you being part of the Equal Sacrifice.  We value every gift you entrust us with and please know that 94% of each gift goes directly to the work in Mesoamerica.  We are in a great need now as we enter into 2019 due to declining donations. Would you consider entrusting GCE to do the work for one more year? 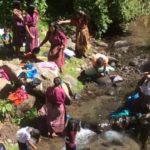 Water and Laundry Day at the River 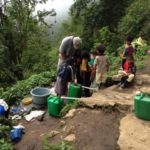 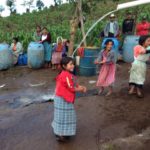 Water coming from the first well in Chanenxil 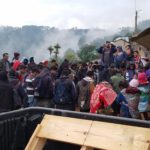 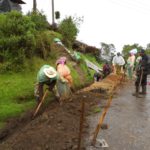 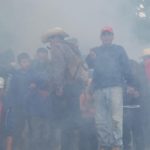 The smoke from the fire works 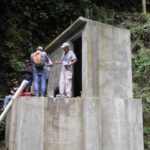 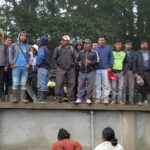 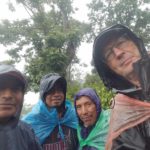 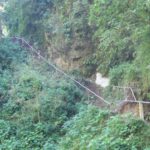